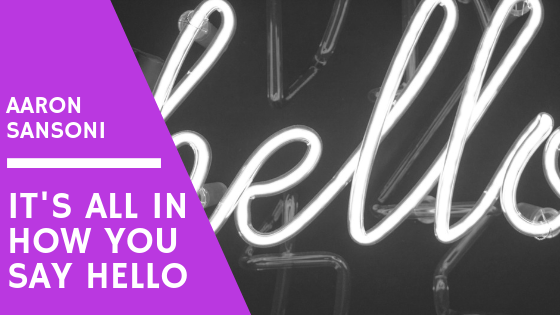 It’s All In How You Say Hello

In today’s climate of ubiquitous technology and to-the-minute updates, if you can’t catch someone’s attention immediately then odds are you won’t catch it at all. Now more than ever it is critical to ensure that your elevator pitch is quick, to the point, and, above all, effective. So how do you do that? The answer, believe it or not, is in your hello.

Think about your last interaction with a new acquaintance. What was your introduction like? Was it generic? Cliche? Mind-numbingly boring? Was the other person’s the same? Failure to engage right away is one of the primary reasons we fail to engage later on…when it matters most.

Now, think about the last time you attended a concert. How did you feel when the band came on stage? Did the lights go down? Were there fog machines? Did they greet you with an ear-splitting yell and a few well-timed guitar chords? More than likely, they made sure that you were on the edge of your seat, earnestly anticipating which of your favorite songs they were going to play first. This is the kind of impression you need to leave with potential clients, investors, and partners. You need to wow them.

I know what you’re thinking: “Aaron, I can’t exactly smash a guitar underneath a perfectly-placed spotlight every time I meet someone new,” and that’s true. What you can do, however, is use that 15-second window (yes, that’s all you get) to create a lasting imprint in the mind of the other person. Here’s how.

Be Genuine
Most people are capable of telling when someone is putting on a show. It sounds scripted, and the sentiment commonly found in authentic statements is severely lacking. You need to believe the words you speak just as much as you want the other person to believe them.

Be Humble
There’s no need to boast if you truly believe in the message you are sending. Peacocking has a terrible tendency to cause listeners to tune out as they choose to focus on your ego instead. You can tell them what you’ve accomplished, but do it in a way that makes you seem grateful.

Show them why it matters
It’s no longer to be matter-of-fact with your abilities. I-statements are great, but they’re not effective when it comes to captivating an already distracted audience. Rephrase your abilities as skills that benefit others. I wouldn’t say “I teach business and sales strategy to entrepreneurs,” for example. Instead, I’d say “I’m grateful to have helped more than 300,000 individuals worldwide reach their business goals and excel in their sales ventures.”

If your hello speech incorporates each of the above elements and meets the other requirements I outline in my Sales Mastery course, you not only have a better chance at winning the attention of your conversational partner but also keeping it. 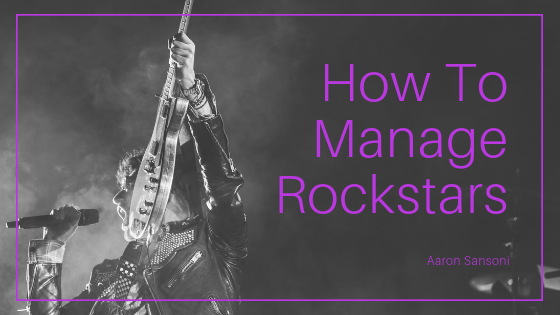 How To Manage Rockstar Employees

Having a team full of rockstars is a fantastic feeling. They do their work and they do it well, leaving you free to deal with issues better-suited to your leadership role. But what happens when your rockstars performers expect star treatment?

While it may be tempting to give your top-grade employees whatever they want to keep them happy, it’s actually quite detrimental to your company. Special treatment could cause other employees to feel resentment…something you don’t want if you’re struggling to keep them motivated in their first place. So, your best bet is to effectively manage your rockstar. Luckily, there are a few tactics you can employ to ensure you’re getting to most out of both parties.

Do Not Reinforce Bad Behavior
Rockstars often believe that they are exempt from several rules because of their value to you and the company. They may show up late, take longer lunches, or skirt corners. This is unacceptable. Hold them to the same standards as the rest of the team.

Do Not Make Exceptions In Front Of The Team
Similarly, top-performers are more likely to ask for favors or exceptions after exceeding a large goal or exhibiting an above-average performance. While it is acceptable to reward positive behavior in front of the other team members, it is never okay to grant these requests in public. In fact, I’d strongly recommend not granting them at all but every situation is different and you’ll need to evaluate on a case-by-case basis. Just be sure to evaluate and respond in private.

Build a 1-on-1 Relationship
You want to create a certain level of respect between you and your rockstar employees to keep them both motivated and engaged. Building a strong relationship is the first step in establishing that respect. It’s not enough to acknowledge their wins in public. You need to take the time to have meaningful conversations in a 1-on-1 environment. It doesn’t have to be daily, but it should be regularly.

Use Them For Training
Unfortunately, the reality of over-performing employees is that they are likely to leave you eventually. Their strong track record makes them ideal candidates for bigger, better positions. This means it is imperative that you get use them to improve the performance and knowledge-base of other team members. Ask if they’re willing to be a mentor or let others shadow their day-to-day activities. Every rockstar you employ should be training the next rockstar in preparation for their inevitable departure.

These are just a few of the tactics you can use to manage your top-level performers on a daily basis. What’s most important is that you set the standard at the start. Find out how to set and maintain standards, as well as how to effectively employ other team management strategies, in my Sales Leadership Mastery course.

Recent Posts
Recent Comments
Archives
Categories
Meta
Login to Aaron Sansoni Training
Reset Password
Enter the username or e-mail you used in your profile. A password reset link will be sent to you by email.